The Menara Gardens are Marrakech’s most famous gardens. They were established during the twelfth century around a lake, which was used to water the fruit and vegetables planted in the grounds. It was initially commissioned by Abd al-Mu’min, leader of the Almohad Movement. Later, the gardens were renovated in 1870.

The most beautiful part of this green-space is the lake, which is presided by a pavilion, also renovated by the sultan Abderrahmane of Morocco and the thousands of olive trees surrounding the area.

The pavilion was built by the sultan Sidi Mohammed ibn Abdallah and it is believed that this is where the sultans met their companions.

We were a little disappointed by the Menara Gardens. In our opinion it looks more like a kitchen garden than a park and the trees are so small that they don’t provide any shade when the sun beats down. If you want to visit this park, we suggest going when it is not very hot, either very early in the morning or late in the afternoon (if you are visiting Marrakech during the summer).

If you would like to visit another park in Marrakech, we recommend going to the Jardin Majorelle. 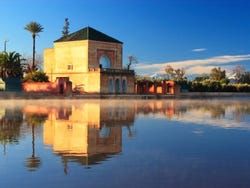 2 km from the Medina

In taxi from Jemaa el-Fnaa . Do not pay more than 10 dirhams.