Commissioned by the Grand Vizier Ba Ahmed ben Moussa, the palace took over ten years to complete and was designed in two stages. At the end of the nineteenth century, Abu Ahmed, a black slave that had risen to power and become vizier had the palace enlarged and had craftsmen from all the country come to work on the mansion.

The building has eight hectares and 150 rooms that lead to various patios and gardens. The most interesting part of the visit is the harem of Abu Bou Ahmed's four wives and 24 concubines.

Curiously, the palace means “the beautiful”. There are several theories on whether the palace was called "bahia" because of its architectural beauty or after the viziar’s favourite wife.

Sadly, all the rooms in the Bahia Palace are empty. When the vizier died, many, including his wives and the sultan took all the art work and furniture from the palace to decorate their own palaces.

Not to be missed!

Although some might be a little disenchanted by the lack of decoration in the palace’s rooms, in our opinion the Bahia Palace is one of the best attractions in Marrakech.

Unless you are only in Marrakech for a few days and don’t have enough time, we highly recommend spending the 10 dh (US$ 0.90) entrance fee to see this spectacular dwelling.

More interesting with a guide

Given that the palace is completely empty and there is very little information in English, we recommend booking a guided tour so that you can make the most of your visit. 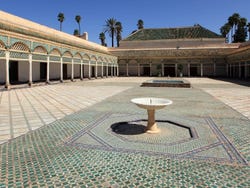 Court of Honor in the Bahia Palace 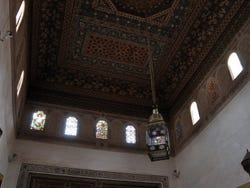 From Jemaa el-Fnaa, take the street Rue Riad Zitoun el Jdid (on the corner of the restaurant Marrakchi). You’ll find the palace ahead of you.