It is a variant of the Roman baths and these find their origins from the Roman Thermae. As well as performing full body washes, the hammams are a meeting place for the inhabitants of the city or town, especially for women.

Initially, the public baths were the only way for Moroccans to spruce up. However, currently all houses have their own bathrooms and today, taking time to go to the hammam is a tradition which the locals do at least once a week.

This tradition is so embedded in the daily lives of the citizens that it is practically impossible to find someone that doesn’t like going to a hammam or doesn’t go at least once a week.

In Marrakech there are two different types of hammams: traditional and tourist spas. Discover the differences between them:

The traditional hammams are located in each neighborhood of Marrakech and are generally close to the city’s mosques (they used to share the same water). These baths have separate facilities for women and men (or different schedules).  These types of hammams will cost you less than 10 dh (US$ 1).

Professional masseuses work in these steam baths, so if you want a massage you can get one for approximately 50 dh (US$ 5). If you would like someone to exfoliate you, you will have to give a 20 dh (US$ 2) tip.

If you would like to try out a traditional hammam you will have to bring a towel, flip-flops, black soap and exfoliating gloves (you can get them in any bazaar).

Some of the most popular hammams are:

The tourist hammams, sometimes referred to as SPAs are more like Turkish baths. These offer the latest beauty treatments, are generally more modern and have mixed-sex facilities for couples. The prices of each treatment are normally over 150 dirhams per person. These are very near Jemaa el-Fnaa.

Some of the most renowned spas are:

Some hotels and riads in Marrakech also include these traditional baths. Note that to use them, you will have to ask in advance so they can prepare the facilities. 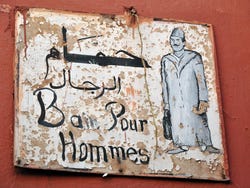 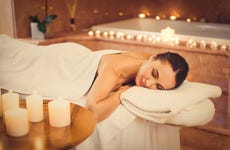 Bath and Massage in a Traditional Hammam Spa